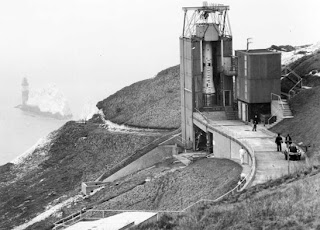 I have for a long time been interested in the UK Space and Rocket program of the 1950s & 60s. The success of this Rocket program was largely down to the people who worked on it. Despite constant Goverment interference and a considerable lack of funds, the Rocket people managed to produce 2 very successful rockets, The Black Knight and Black Arrow.
To assemble and test each rocket before shipment to the Australian launch site at Woomera, a local test site was required. The Needles Headland offered a secure site with suitable underground accomodation. In 1955 the Highdown site was leased from the Ministry of War.
Under the instruction of architect John A. Strubbe, construction began in April 1956. The Needles Headland was transformed looking now like something out of Quatermass or James Bond. A complex of specialised buildings was constructed over the New Battery and underground control control and instrumentation rooms were converted from the old magazines. There 2,200 square feet of control rooms and underground stores, 4,260 square feet of laboratories and offices and 3.080 square feet of workshops and smaller machine shops. The dining rooms catered for 80 people at a time. In all there was space enough for 240 people, a number reached in the early 1960's.
In the early stages serious consideration was given to accommodating Blue Streak at the site. This would have meant digging silos deep into the hillside - impractical but not impossible.
The 10 metre long Black Knight rockets were assembled in the workshops. Then they were towed down the newly built road along the cliff top above Scratchell's Bay to one of the two 60 foot high test gantries. The rockets were erected inside the steel and aluminium towers by men dressed in protective suits with glass fronted helmets operating one and a half ton mobile cranes.
During a test firing all activities followed a strict time sequence, with the operation of the rocket controlled automatically by a Sequencer unit. At any point the process could be aborted by the press of a button from several monitoring positions, most of which were underground. In addition to manual observations taken from the secure Blockhouse, an array of camera, tape recorders and specialised devices automatically logged data from several hundred instrumentation sensors placed within the engine and other rocket systems.
With the missile successfully tested, a team of engineers accompanied it to the launch site. In all, 23 single and two-stage Black Knights were launched, between September 1958 and November 1965.
The success of Black Knight suggested the need for Britain to develop a capacity to launch satellites, and in 1965 the Highdown team started work on Black Arrow, an 18 ton, 13 metre, three stage rocket designed to put a 300 kilogram satellite into a circular near-Earth orbit.
Five Black Arrows were built and four launched into space, the first in 1968. The project reached its zenith on the 28th October 1971 with the launch of the first, and only, all-British satellite put into space by a British rocket. The experimental satellite, designated Prospero in space, achieved a near perfect orbit and carried out short term data collection on micrometeorites and space erosion.
The concrete bones of the Highdown rocket site are one of the few reminders of the successful, if short-lived, British space programme of the latter half of the 20th Century. The last Black Arrow now resides at the British National Science Museum. Another reminder is Prospero, which will continue to orbit the Earth until at least the year 2200.